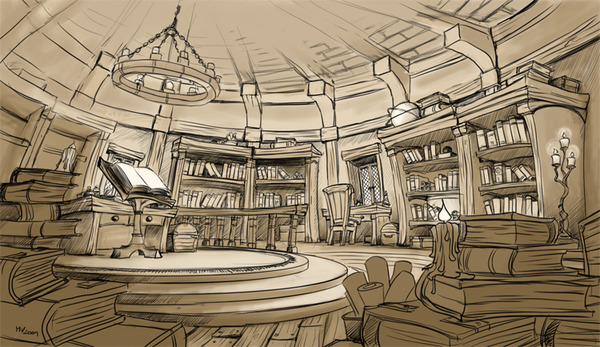 I’m going to rummage through my old posts for a moment and dredge up the ODIN Project. Its intent is to make interactive stories that scale well with lots of participants. These two posts explain why a multiplayer story is hard (seriously, exceedingly hard). If we want our actions to have impact on the story, and want all the players to have that same power, then we start to see the need for an “AI Game Master”.

You can skim or just skip them if you like. I doubt I’ve mentioned this, but it’s kind of my life’s dream to accomplish a truly multiplayer adaptive story, and so over the next few weeks, I’m going to break it down.

Last week I talked about what makes a good setting, and how MMOs tend to succeed or fail at those criteria. Now we’re going to take that a step further and explore how to actually represent those kinds of settings in a game. How would a campaign GM create a good setting, and can we get a program to mimic that behavior?

As always, the game design and high-level concepts will be posted here on Critical Hit, and the technical/academic nonsense I use to back it up will be posted over at Synthetic Creativity.

Before we begin, what are your thoughts? Do you believe it’s impossible to create a digital author that can learn? Can computers ever think of stories even close to the caliber of a human narrator? Is this simply beyond our horizon? Leave your comments…

MMOs bear a startling resemblance to a reality TV show. The best ones have a well-thought out, rich storyline that leads up to a definite ending. And like most reality TV shows, MMOs tend to run beyond the normal lifecycle, shutting down only when they are no longer profitable. What it means, is a ton of ‘filler’ content. It means that each ‘season’ (expansion) must introduce some antagonist even greater than the one before.

Most importantly, it means that the story will drag on in chunks until the producers decide there’s no money left to be had, at which point it is promptly scrapped. Sound familiar? 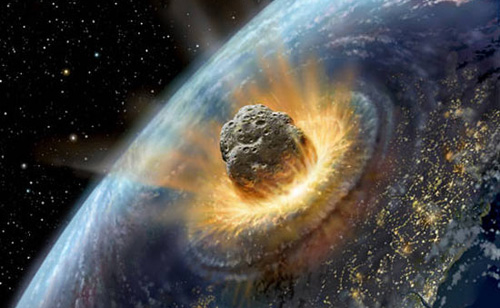 Totally saw that one coming

So why not make an MMO with a pre-defined ending time, say 3 years from launch. The main world story could be richly detailed, with major events planned on a monthly basis that lead up to the finale. And WHAT a finale that would be! I mean, most MMOs don’t even last that long anyways, right? Might as well go out with a bang.

Would you participate in that spectacular finale?

Would anyone still play it knowing that it will end?

Don’t all games have to end eventually?

So in my newest *recurring feature, Shameless Plug, I’ll be outlining my own little conceptual project. I call it Scalable, Persistent, Interactive Narrative (SPIN). These four letters might just give the MMO industry a little creative spark, so let’s dive right on in! 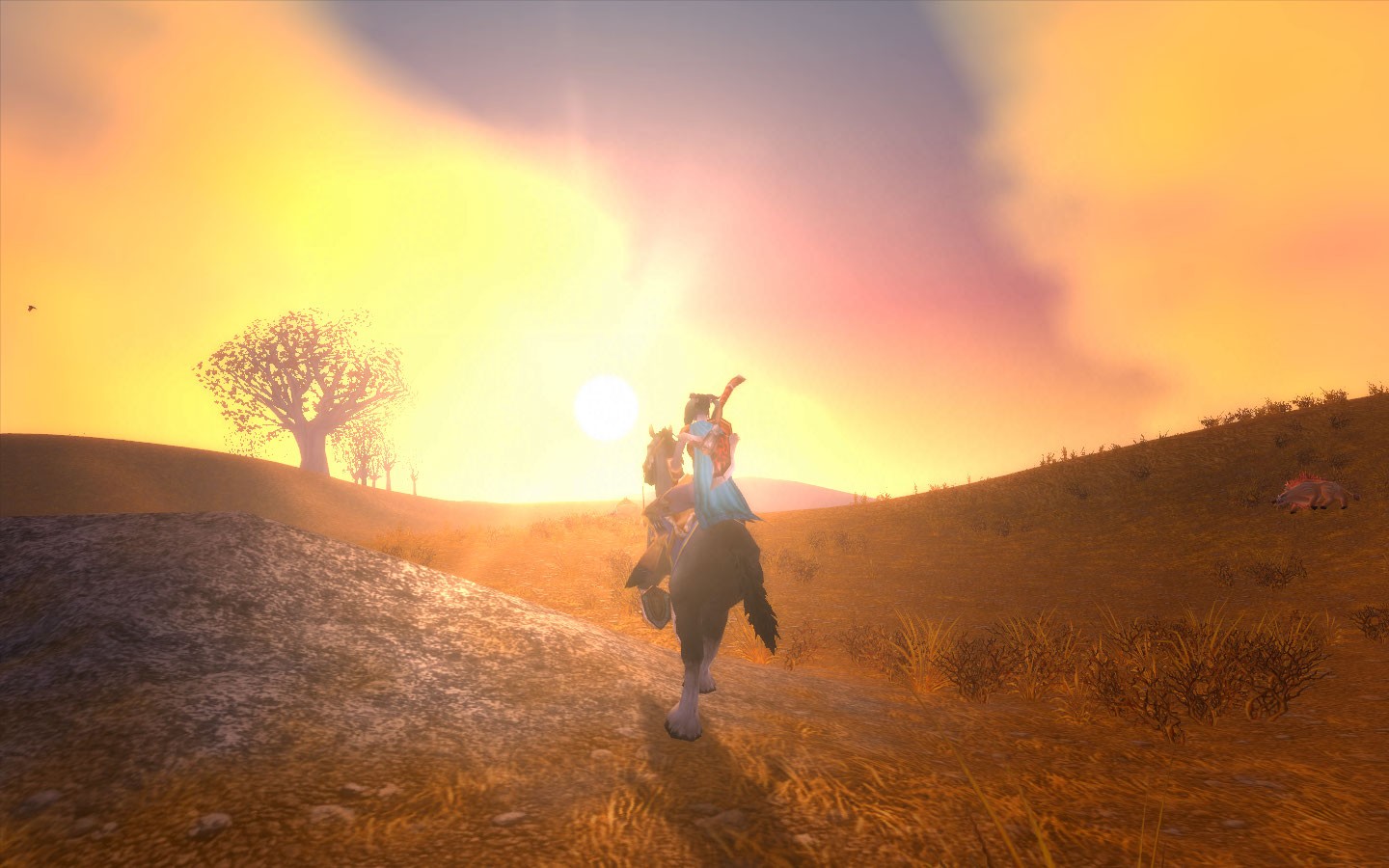 An adventurer wanders into the unknown…

Part I: Persistence – Done. All we need is a reliable server and boom! Persistence. The game world remains even when you log off. Only three letters left… this might be a short article! Or perhaps not…

Part II: Scalable Persistent Interaction – This one’s just a bit trickier. We want a ‘massive’ amount of concurrent players, all hammering on things and influencing the world in meaningful ways. But there aren’t enough game developers on earth to produce content faster than players can consume it. Ta da! Introducing the sandbox MMO! It has two possible routes: procedurally-generated (LOVE), or player-created content (Minecraft, EVE Online).

There’s a wealth of articles about sandbox MMO design, detailing how to make infinite worlds where you’ll never run out of content. However, we’re not stopping there. You see, players aren’t naturally skilled at entertaining themselves without some structure or purpose. There’s always stuff happening, but the events in a sandbox are more like news rather than cohesive stories.

Part III: Narrative – Piece of cake. Make a linear game bursting with cinematic cutscenes, and ‘experience’ a single story from start to finish from the hero’s point of view. Much like a book or film, where the story is completely in the hands of the writers. But if that’s the case, you might as well write a book. It doesn’t really take advantage of the full potential of interaction, does it? It seems we’ve taken two steps forward, one step back.

Part IV: Interactive Narrative – Good so far? Well here’s another curveball. The difficulty of this proposition just shot up faster than EVE’s learning curve. How do you make a cohesive story that can be altered by players and still have the quality of a book or film? The closest thing are branching storylines, which act like a choose-your-own-adventure book — pre-written stories split apart or merge back together. Despite adding replay value, it takes a tremendous amount of effort for the developers to author all that content. It’s a waste of the paths not taken.

Or you could let each player influence the story, and simply instance out that “timeline” into some other alternate branching reality… but then we’re back to a single player game. One step back.

Might I suggest another medium that has worked in the past? Pen and paper RPGs. Now we’ve got a “developer” who’s constantly watching over the story and pumping out hand-tailored content. The players impact the custom story, and it reacts to them. This model actually holds up well if the digital counterpart is complex enough. However it requires a creative (and hopefully benign) dungeon master at all times, and is limited to small groups…

Part V: Scalable Persistent Interactive Narrative – Ok, now we’re out of our league. Not only do I ask for a cohesive dynamic story, but I want those changes to be permanent, and introduce thousands of simultaneous agents of chaos (players) into the mix. A choose-your-own-adventure book is already insufficient for Part IV, now imagine 10,000 simultaneous readers of the same book. And for a pen and paper RPG, you’d need a proportional ratio (scalable) of dungeon masters to players, dedicated 24/7 (persistent). That’s just insane.

So once again, the avenues remaining are (1) AI dungeon masters (procedural), and/or (2) Players who are given limited dungeon master tools. Both have a long way to go before they become compelling.

So that was a very lengthy setup of the problem. In the coming posts, I’ll illustrate some ideas for fusing these two paths together to achieve SPIN. But don’t get comfortable, I still need your voice of reason! We’ll either create something beautiful, or an abomination that defies natural design. Tune in next time on “Shameless Plug” to find out!

You heard it here first, I’m starting a recurring* feature. The catch is that I can make no promises as to the frequency at which they recur. Due to the rather unpredictable nature of life, I often find myself inconvenienced, in mild peril, or otherwise distracted by shiny wikipedia articles that lead down an information rabbit-hole.

Irregardless, I will occasionally and sporadically create a Design Spotlight: an article reviewing a (relatively) recent advance in game design or storytelling, which has been or could be applied to MMOs. Just as a hint, the next Design Spotlight will draw from a very brief, and primarily 2-person game called Journey, developed by thatgamecompany. Do some homework on it, there’s a lot we can learn and discuss.

In case you don’t know it, perhaps you’ll recognize the pictures. It’s the game with the desert and the mysterious figure with a long red scarf. Oh the lessons in storytelling and natural quest design we can discuss…